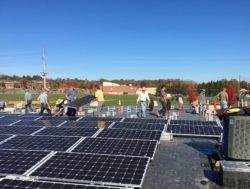 EMU professor of Business and Economics, Jim Leaman is known for his passion for sustainability, and climate solutions. That passion was realized during a sabbatical research project, in partnership with a local architect and home builder on sustainable housing. Their goal was to make a house that was carbon neutral in operations and was even able to power an electric vehicle to reduce the carbon footprint from transportation.

As they began work on the project, they found that there weren’t many resources on the best path to achieve this goal, despite its clear importance in the fight against climate change in the United States (housing and transportation combined make up about 75% of energy and CO2 emissions in the US). The common answer to their question was to bolster the thermal envelope of the home so that it uses fewer resources to heat, cool, etc. This answer was often put forward as the preferred alternative to using solar PV, which was considered to be less economically viable for homeowners.

Jim believed that it was essential for sustainable housing options to be both economically affordable, and socially livable, and so began looking at other options for sustainable home building. As he looked, he found that most homes are designed with little to no concern for the possibility of solar, despite a clear environmental and economic benefit from solar power. In fact, he found that solar PV is the most economically viable option in every state but Alaska for an environmentally friendly home.

Without accounting for the environmental benefit, Jim found that using solar, instead of spending the extra money on a premium thermal envelope, would bring a 10% annual average return over 30 years. This is groundbreaking in the sustainable housing world, and counter-intuitive for many, but Jim believes it is an important finding for the future of sustainability in the United States.

This year, the Center will begin funding Jim’s continued research on the project, as part of our focus on innovative solutions to climate change. As Jim continues to write up his findings, resources will become available here on the Center’s website, including viability and return calculators on many choices and selections in residential construction.. His long-term plans for the project are to publish the findings in a book, for an easy-to-reference resource for homebuilders and homeowners alike.

To learn more about Jim’s work, check out this podcast put out by EMU.